skip to main | skip to sidebar

"& sometimes language has to adapt," I continued. "I mean, Finnegan's Wake starts in the middle of a sentence, for example."

I was at a weekend gathering, playing devil's advocate at some English Majors who were taking issue with the fact that I'd just used "OMZ" in a sentence—a versatile surprise-signifying initialism of my own creation, standing for Oh My Zoo. The English had been rendered temporarily paralyzed with the implied equation of myself & Joyce. I used this to buy myself precious seconds to regroup my thoughts. To be honest, loyal readers, I was as mortified as they—sure, at the Joyce thing, but more-so at my inadvertent use of "internet slang" in verbal conversation. You see, since the days of my first cell phone, I've taken care to maintain the utmost grammatical and syntactic integrity in my texts, emails, & speech alike, but, lately, I've been slipping up.

Call it peer-pressure, or maybe just another sign that life moves too quickly these days, but I'm hereby officially changing my stance: language is the spotted owl of social mores, & it needs to adapt to the times, or risk getting eaten by the loggers. & I'll go one step further: I believe science should be leading this charge. & it has! Oh, how it has!

Case in point: I'm an ABD NLM fellow who originated in OHSU's BEHN, but now I'm in DMICE, located in the BICC. Mostly, I'm interested in using SVMs & kNNs to classify Neuroscience documents, which I study using various OOP languages, TSDoS (Figure 1). If you can decipher that sentence, you're probably either one of my collaborators, or an acronym savant. & yet, in my experience, such language is all too common in academic & mixed circles. I recently attended a talk by (redacted) in which, 20 minutes in, the presenter had yet to define a single one of (his/her) terms. Not wanting to seem out-of-the-know, I began to nod sagely at what I hoped were all the right pauses, until I looked around & saw that most of the audience seemed to be either playing Words with Friends*, or blogging about the merits of Obamaromneycare**. In mid-nod, I took a moment to think the worse of them, but then wondered—could they really be blamed?

When giving a scientific talk—even to a completely academic audience—it is imperative that the presenter assume their audience knows only what is included in their presentation material. Others might disagree, but I believe it is the responsibility of the presenter to either be willing to captivate their audience with excitement and intelligible education, or to call in sick. As Scientists, we're also spokespeople. Few have the first-hand understanding of our respective  research domains, and fewer still believe they would even want it. When communicating with our colleagues and the public, it is our job to ensure they're equipped with the tools to understand why our research matters at all! Outside of this, we risk becoming impenetrable containers of information—great, if someone needs a paper weight, but totally useless if they want to learn something new. 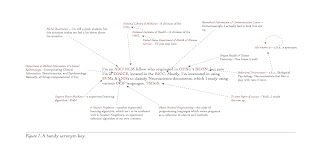 * Start a game with me! My screen name is "The Kyle Ambert".

After spending all week at ACL, I wholeheartedly agree with your stance on defining terms in talks.

Thanks, Steven! You were at the Anterior Cruciate Ligament?!

I invite you to read with me.

Friends of the blog.

And here are the things about me.